Fees, taxes, and more – an analysis of selected e-liquid regulations in Europe 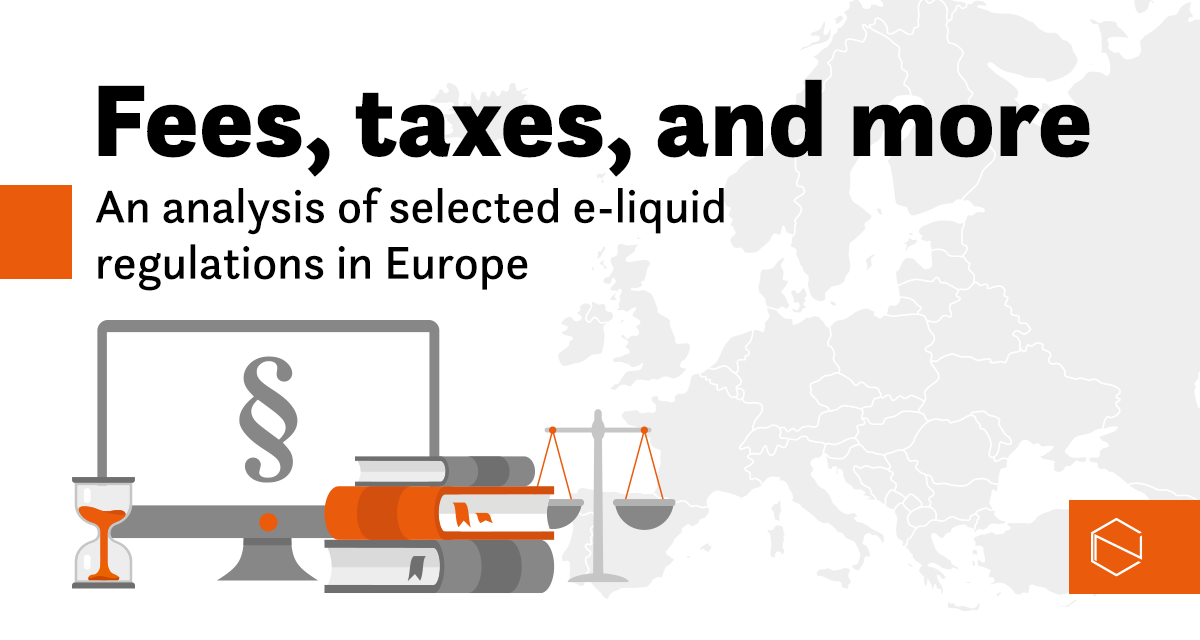 E-liquid regulations are, undoubtedly, a broad topic. Not only it affects the availability of the products – as, i. e., some may be banned due to flavours – but also their entering the market. Before e-liquids appear on the shelves, entrepreneurs have to register them, and it may cost. How much? And what else is there to know about e-liquid regulations? Let’s find out!

Let’s check the first factor which is essential in introducing e-liquids to the European markets – e-juice registration & notification fees. In some countries, to sell a product, one has to pay to register it first and later pay an annual amount of money to maintain it on the market. In others, e-liquids are not subjected to fees and registration is free.

The country with the highest e-liquid registration fee is Luxembourg. To register the product there, one has to pay 5 000 EUR.

Denmark is the second, not so cheap to get into the e-juice market. The price of product registration is calculated per month, based on an annual fee. For example, if one registers a product in July, it’s 7 500 DKK (6x 1 250 DKK). Additionally, to maintain a product, it’s 15 000 DKK, which is a little above 2 000 EUR.

Another country that ranks in the highest European spots is Sweden. The homeland of Swedes introduced some legal changes, which increased the e-liquid fees, beginning on 1 August 2022. Now, either a notification or modification of a product costs 10 500 SEK, which gives around 965 EUR.

Let’s state that there are some countries with not such a linear law concerning fees, and Poland may serve as an example here. The cost of fees depends on the company’s size. For micro and small companies, it’s 1 766,40 PLN (about 375 EUR); for middle-sized companies, it’s 2 944,40 PLN (about 627 EUR); and for the biggest companies, it’s 5 888,80 PLN (about 1 255 EUR). What is more, Poland is also the only country in Europe with such a fee system, and the rate grows each January.

If you are interested in e-liquid fees and registration costs in other countries, contact us at sales@chemnovatic.com or click the banner below to read more about our consultations and regulatory services.

Now let’s jump onto the topic of taxes. The highest excise in the European Union regards the e-liquids sold in Portugal. Lately, it grew by 1%, up to 3,23 EUR / 10 ml.

After Portugal comes Finland, which is mentioned here for the first, but not for the last, time. In this Nordic country, the e-liquid tax is 0,3 EUR/ml.

In other countries, tax rates vary but do not reach the level of the 2 previously mentioned ones. However, similarly to the regulations of e-liquid fees in Poland, there are some non-linear laws in Europe.

Another example of a different approach toward taxes is in Latvia. The rate there is 0,01 EUR/ml and 0,005 EUR/nicotine mg, which consequently sums up.

As for e-liquid flavoring bans in the European Union, it’s easier to mention the countries that introduced bans than those which allow flavored e-juices.

The first one is Denmark. The Danes introduced the ban not so long ago, which is why flavored e-liquids that appeared on the shelf before 1 April 2022 can be sold till 31 march 2023. Apart from those, only tobacco and menthol flavors are allowed.

Similarly to Denmark, only tobacco and menthol are allowed in Estonia. However, not so far from there because in Lithuania and Finland, the bans are stricter. Even menthol flavors are restricted, leaving only tobacco allowed.

Let’s also state that there is a country in Europe with an unusual regulation, and it’s Austria. Flavored e-liquids are allowed there, however, the products’ names can not contain the food names, ex. watermelon.

If you want to know what other countries have implemented the flavour ban, make sure to check e-liquid regulations. Moreover, if you are interested in our Chemnovatic Molinberry line, you can check them by clicking the banner below. Choose from among: sweet, tobacco, fruit, drink, and mint flavourings!

E-liquid taxes and fees are, undoubtedly, a hard nut to crack for entrepreneurs, especially for those who make their first steps in the e-liquid market. Additionally, impacting the final e-liquid price, many customers decide to order the products from abroad, which, in many cases, is not legal.

Although ordering e-liquids from abroad is allowed in Denmark, one has to notify it first.

In recent years, the trend concerning CBD products in the e-liquid market couldn’t go unnoticed. Due to that, let’s also take a look at CBD regulations regarding e-liquids.

Let’s start with the countries where CBD products, both nicotine-containing or nicotine-free, are forbidden. Here, there are The Czech Republic, The Netherlands, Spain, Lithuania, Portugal, and Sweden.

Now, let’s see which countries are less restrictive. CBD present in nicotine-containing e-liquids is also forbidden in Austria or Belgium. The reason behind that is that it may suggest health benefits. However, in these countries, the substance is allowed in nicotine-free products. In Austria, before launching such products on the market, one has to make a registration, and the information about CBD has to be present on the label. As for Belgium, CBD in nicotine-free products is tolerated, but the authorities plan to make them perceived as medical products.

In this place, we can also mention the United Kingdom and Northern Ireland. In both countries, CBD is forbidden in nicotine-containing e-liquids but is allowed in nicotine-free ones. In that case, the products don’t have to be notified or registered.

When it comes to medical products, CBD-containing e-liquids are allowed in Cyprus. However, to have such a product fully legal, one has to register it first and obtain acceptance from relevant authorities.

Let’s also state that CBD may fall under drug laws. Such a situation takes place, for example, in Finland and Slovenia.

Above, we mainly focused on countries where CBD and nicotine-containing e-liquids are restricted, but let’s not forget about those where it’s allowed. In this group, there is France, where such products are legal, but can not be advertised as therapeutical. Additionally, there is Estonia, where one sells CBD e-liquids, but has to notify and register them first.

Keep, in mind, that to develop nicotine-containing e-liquids, one shall use the best quality raw materials. One of them is, undoubtedly, our pure nicotine liquid – PureNic 99+! It’s considered to be one of, if not the, purest nicotine liquids on the market. Be sure to check it!

The e-liquids market is constantly evolving, introducing new restrictions, bans, or increasing taxes. However, the net worth of the market is also getting bigger. That’s why many entrepreneurs decide to start their businesses in this sector.

To do so, it’s a good move to learn the laws and regulations first. We can help you with that! Just make sure to subscribe to our newsletter and follow our blog. Moreover, visit this site to read more about e-liquid regulations. We hope this text helped you find the information you were looking for!