Flavoured e-liquids banned in the Netherlands! 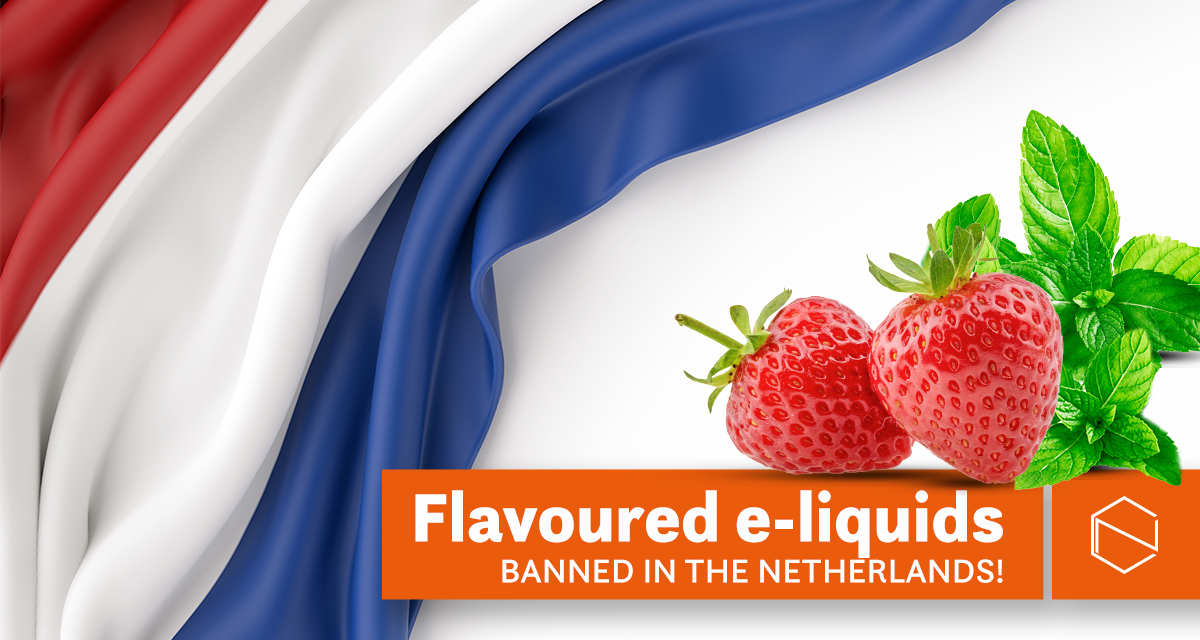 In the last days of November, the Dutch authorities published an amendment that clearly stated – flavoured e-liquids will be banned in the Netherlands. Thus, it will become another country where such restrictions will come to life.

Up to that point, the e-liquid flavourings ban was a thing to expect, as back in 2020, the authorities announced they were planning to ban flavoured e-cigarettes and vapes. The grapevine had it that it would come to life in 2023. Since 28 November, the exact date is known. The ban will come to life starting 1 October 2023.

Details of the flavour ban

The ban applies to vape juices, pre-filled pods, and disposables. Additionally, no matter if e-liquids are nicotine-containing or nicotine-free. Both are banned.

Only tobacco flavours will remain allowed

The main part of the new legislation is that starting on 1 October 2023, sales of e-liquids flavored e-liquids and e-cigarettes with fruity, sweet, drink, mint, and more aromas will not be legal.

However, there will be an exception. Tobacco e-liquids will remain allowed if one condition is met. They can contain only 16 allowed substances:

As the NLTimes states: according to RIVM (National Institute for Public Health and the Environment) about a quarter of the current tobacco flavors can be made with that list of ingredients.

On the other hand, Emil ‘t Hart, from the trade association Esigbond, has a different opinion: “We were able to taste the first variants. That’s a very weak derivation of what should be a tobacco flavor“.

Only tobacco-related words and images are allowed!

The ban not only forbids flavours other than tobacco manufactured with the use of allowed substances but also applies to the packaging. These can not contain images related to anything besides tobacco.

Furthermore, the rules applying to e-liquids names and words on e-liquid packaging will be stricter. E-liquid names like those stated by NOS.nl, “bad boy fuel“, “OMGin”, or “chillin” will no longer be allowed.

Implementation of the e-liquid flavour ban in the Netherlands

The e-liquid ban will come to life in 2 stages. The first is banning the production of flavoured vaping products. Manufacturers of flavoured e-cigarettes and refill e-juices have time till 1 July 2023.

Then comes a sell-out period between 1 July and 1 October 2023. After that date, the ban will come to force to a full extent.

Above, you could read the opinions of RIVM and Emil ‘t Hart of the trade association Esigbond. We also asked Marcin Górecki, the head of the Chemnovatic Legal Regulations Department, what he thinks about the Dutch ban. Here’s what he said:

“The Netherlands is the first country that went so far in regulating flavoured e-liquids on a national TPD level. It is a precedent approach in the entire EU, specifying exactly what ingredients can be used. Let’s mention, that so far, some countries had their lists of what ingredients not to use.

The Netherlands has a completely different approach to vape products than, for example, the UK, and is a part of a certain trend we see among some Member States of the EU. The Dutch actions can also be a kind of closing certain loopholes in the regulations that exist in some countries that limit flavours other than tobacco, because, listening to the market, some manufacturers, under the guise of tobacco flavours, introduce mixed flavours to make their products more attractive to customers.

Reading the justification for introducing such a regulation, you can see that the Netherlands has put a lot of work into selecting the allowed substances, but, as mentioned, the aroma itself loses, as it does not taste as those available so far without a limited list of ingredients.”

With the new legislation coming to life, the Netherlands will join a group of multiple European countries that have already banned e-liquid flavourings. The flavour ban is present, among others, in Latvia, Denmark, Finland, and Estonia.

It seems that the number of countries forbidding the use and sale of flavoured e-liquids and e-cigarettes is growing. Not the other way around, and only time will tell how things will be in the future.

If you want to be up-to-date with the e-liquid regulations, check our page and subscribe to our newsletter!

You can also read more about fees and taxes in Europe or placing vaping products in the German market. In case of any questions, don’t hesitate to contact us at sales@chemnovatic.com. We can help you with vape regulations or e-liquid registrations!