Nicotine pouches - what are they? 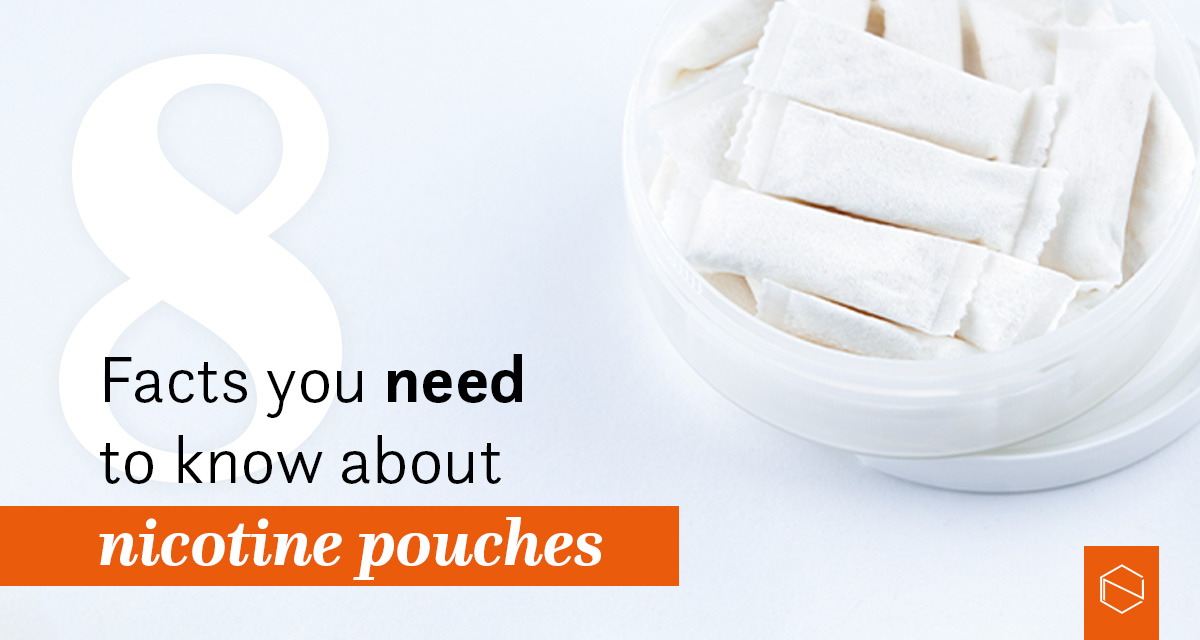 1. How nicotine pouches are different from snus?

Traditional snus (brown snus, snuff) is a moist tobacco product popular in Scandinavia. It looks like tobacco wrapped in a cellulose bag, resembling a tiny bag of tea. Sometimes it is referred to as ‘snuff’. Traditional product is made of a mixture of dried tobacco leaves and salt, which is moistened with hot steam. The finished product contains about 50% water and should be kept in the fridge. There is also a version of it without cellulose packaging, which is called “loose snus”. Usually, snus is applied by placing it between the lower or upper lip and the gum. As a result nicotine from tobacco is absorbed into the body from the oral cavity. Moreover, the nicotine content in snus is higher than in a traditional cigarette. Although nicotine pouches resemble traditional snus in some ways, there are significant differences between those two products that need to be discussed.

Nicotine pouches (white snus, or non-tobacco snus) derives from traditional, brown snus. The only difference between the two is the nicotine carrier. Tobacco snus contains tobacco leaves, while nicotine pouches are filled with cellulose. Powdered cellulose is soaked in a mixture of pure nicotine, aromas and pH-alignant (to make product pH more similar to the natural pH of the oral cavity). The mixture is additionally moistened with PG, however, the nicotine pouches are a little dry. It means that the user may feel the nicotine effect and a taste a few seconds after placing a pouch behind a lip.

There is a ban on traditional snuff distribution, which has been in force in the European Union since 1992. The only country exempted from this rule in the EU is Sweden. This is partly due to the fact that Swedes are very attached to snus which is their traditional stimulant. In Swedish, there is even an idiom ‘fint som snus’ – beautiful as snus, which is supposed to be synonymous of the highest quality or form. In 1995 the European Union wanted to ban the product also in Sweden (which at that time was about to enter the EU). Sweden however, managed to convince the European Commission that this could lead to the rejection of EU membership in a general, national referendum. Sweden maintained the right to use brown snuff only at the territory of the country and committed itself not to export it to other EU member states. Snus is also not prohibited outside the EU, e.g. it is very popular in Norway, and it is also distributed in the US. Moreover, brown snuff can be legally sold in Switzerland.

4. Nicotine pouches are not prohibited in the European Union

Snus is the most popular in Scandinavian countries such as Norway and Sweden, while the biggest producer is Swedish Match. What’s interesting, Swedes are one of the least-smoking nations in the European Union. It is estimated that only 5% of adult Swedes smoke cigarettes every day. Also, a fact is the growing trend of snus popularity in the Scandinavian countries over the years. The disappearance of smoking is seen as the result of a longstanding campaign aimed primarily at young people to raise awareness of the harmfulness of smoking. The availability and popularity of snuff on the Swedish market may have played some role in this phenomenon.

6. Are nicotine pouches, or snus harmful?

The alleged harmfulness of alternative nicotine delivery products has been a subject of a heated debate, and it is true that opinions on this topic are divided. Nevertheless, there is no doubt that tobacco harm reduction products (and nicotine pouches belong to this group) are another alternative to traditional cigarettes. Nicotine is a stimulant in every form, including snus pouches. However, by absorbing it through the mucous membrane into the bloodstream, you can avoid harmful combustion products and so-called passive smoking. Everyone (both non-smokers and cigarette users) know about the harmful effects of smoking. The rescue for smokers can be drugs that help to quit. In a situation where it is impossible to resign from nicotine completely, hence nicotine replacement therapy and modern alternative products like e-cigarettes, or nicotine pouches can be really helpful.

Conscious and responsible manufacturers of tobacco harm reduction products are aware that cigarette substitutes are much less harmful than traditional, combustible cigarettes. Nevertheless, you should always make the highest efforts to provide users of e-cigarettes or nicotine pouches with the top level of safety. Chemnovatic has been supplying top-quality raw materials for many years. Our PureNic 99+ pure nicotine is of pharmaceutical grade with a purity of more than 99.9%. It has gained worldwide recognition from hundreds of manufacturers. Chemnovatic freebase nicotine extract is perfect for nicotine pouches applications. It is completely odourless, flavourless, and crystal clear, barely influencing the smell and flavour of the final product. Chemnovatic PureNic 99+ pure EP and USP nicotine liquid come with a set of documents and certificates ensuring the adherence to quality, safety and legality standards. If you would like to find out more about our pure nicotine click here or contact our sales team at sales@chemnovatic.com. Properly selected, high-quality raw materials play an important role here as well as laboratory tests and product quality control.

In the case of e-liquids, legal requirements impose laboratory tests. European TPD directive strictly defines the types of tests for e-liquids before the product enters the market. This is to ensure the health and well-being of consumers. The TPD laboratory tests intend to ensure that no hazardous substances such as heavy metals or mutagenic substances are in the e-liquids. Not only e-liquids should undergo laboratory tests. Although nicotine pouches, in general, are not subject to the TPD directive, they can be tested for security reasons and for the internal needs of the company manufacturing these products. In the case of nicotine pouches, we test exactly the same parameters as in case of e-liquids, however, the sample undergoing testing is different. We check whether unwanted particulars are present in the composition of the product.

Chemnovatic as a manufacturer of e-liquids and e-liquid raw materials uses TPD compliant products. With us, you will have a guarantee that your final e-liquid product would successfully pass TPD tests. To learn more about TPD legislation and procedures, read more here. What’s more, we provide our customers with laboratory tests including toxicology and emission tests of ready e-liquids and composition tests of other tobacco harm reduction products. Every European country accepts our laboratory tests. Below you will find exemplary tests that we perform:

If you would like to subject your products to laboratory tests or talk to our advisors about the possibility of testing specific product parameters, please contact us at sales@chemnovatic.com