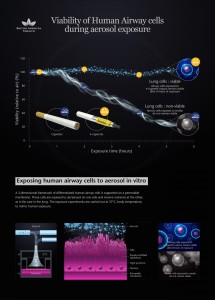 According to tests performed by British American Tobacco and tissue engineering firm MatTek Corp., the E-Cigarette vapor is no more dangerous to human airways and respiratory tissue than air.

The results were obtained using a combination of laboratory tests and VITROCELL smoking robot with MatTek EpiAirway tissue. Robot was used to inhale cigarette smoke, e- cigarette vapors and air through EpiAirway tissue to test the influence of smoke and vapor on human respiratory tissue. Cigarette smoke was inhaled in accordance with the standard ISO 3308:2012 (35 mL puffs drawn over 2 s with 1 min intervals) while the electronic cigarette vapors were inhaled with a 80 mL puffs drawn over 3 s with 30 s intervals as currently there is no ISO smoking regime for e-cigarettes (the independent regime chosen potentially provides a dose to the cell cultures that exceeds that generated by machine smoking regimes).

The researchers tested the biological system using known irritants in liquid form. Later they exposed the EpiAirway tissues to traditional cigarette smoke or e- liquid aerosol generated from one of two types of commonly available e-cigarettes for up to six hours. During testing, cell viability was measured using an established colourimetric test in 1 hour intervals.

Test results show that traditional cigarette smoke reduces cell viability to 12% (almost complete cell death) after six hours. At the same time, neither of the e- liquid aerosols showed any significant decrease in cell viability. Even after 6 hours of continuous, aggressive exposure, the results of e- cigarette vapours were nearly exactly the same as in test cells exposed to clean air only.

Hopefully this research (available HERE) will help bring the argument of “e- cigarettes being more harmful than analog cigarettes” to an end as it is another strong proof showing the opposite. Especially one conducted by a big player of the tobacco industry. It is also (with recent BAT’s actions) a clear statement that the company is clearly moving to the light side of The Force.

Are we afraid of the competition? Actually it is the opposite- an asset to the industry with huge potential in both development and legal side of the e- cigarette and e- liquid manufacturing has joined the battle. We hope that the presence of such a well known, established company will not only help progress the industry even further but will also help convince both tobacco and medical companies, peers and researchers to the health benefits related to vaping as opposite to smoking traditional cigarettes.