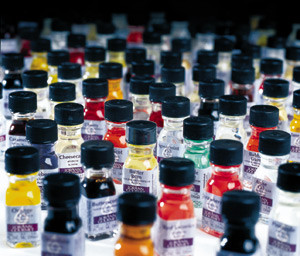 A bit of history…

Electronic cigarette was born in the 1960’s thanks to Herbert A. Gilbert, who patented a device that actually was a smokeless, tobacco-less cigarette. It worked by heating a nicotine solution and producing nicotine vapors that could be then inhaled to ingest nicotine.

The invention did not catch on until 40 years later, when a Chinese chemist Hon Lik proposed using an ultrasound-emitting element to heat and vaporize a liquid containing nicotine. He was also the one to start using Propylene Glycol to dilute the nicotine solution.

Since the first e-cigarette was sold, both e- cigarettes and e- liquids have come a long way – from simple, basic liquid heaters to complicated, customizable high- tech devices and from crude, tasteless or tobacco flavored liquids full of impurities to high quality, thoroughly tested e- liquids in as many flavors as You can think of.

Now that vaping is gaining popularity and is here to stay, let’s take a closer look at e- liquids – what is an e- liquid, what substances they do contain why are nicotine vapors so much better for Your health than regular cigarette smoke.

What is an e-liquid?

Most people know that e-liquid is the mixture of components that you put into your e- cigarette for it to became the ‘cigarette’. It produces vapors, gives the user a nicotine kick and adds that nice smell and flavor.

What actually goes into that „mixture”? Most e- liquids comprise of 3 main components: Base, Flavor and Nicotine.

The Base is what the flavor and nicotine are dissolved in. It is a hygroscopic liquid that turns the solution into a smoke- like vapor. Most companies use Propylene Glycol (PG), Vegetable Glycerin (VG) or a mix of the above as their bases. They are common in food and pharmaceutical industries (PG is used in nebulizers and inhalers since the 1960’s for example), they are also harmless and safe to ingest. Recently some manufacturers introduced the Bio Base, it is composed wholly or significantly of 100% natural agricultural ingredients – glycerin (VG) from plants and propanediol (PDO) – which is a natural substitute of propylene glycol but it is petroleum-free – is derived from natural corn sugar. It is not only 100% allergen free but also environmentally friendly.

There are hundreds of various flavors, not only classic tobacco or menthol flavors (there are flavors imitating well known cigarette brands for example) but fruit, drink, bubble gum, or even dessert or cocktail flavors. You can even get your e- liquids custom made to suit your taste.

Nicotine in low dosages (just like the one used in e- liquids) is a stimulant, in extreme doses it can be harmful. It gives you that rush every cigarette smoker craves.

E-liquids come in a various nicotine contents, usually ranging from 3mg/ml (or mg for short) up to 36mg/ml, but the most popular ones usually go as high as 20mg/ml which is the limit set by the upcoming EU regulations. Higher nicotine content is responsible for that „throat hit” sensation many vapers are looking for. Usually people starting to vape as a way of quitting smoking analog cigarettes start with higher nicotine dose and gradually reduce its content. There are also nicotine- free e-liquids for those wanting to quit nicotine consumption but would like to keep vaping.

So far no conclusive research on the negative effects of e- smoking on human health have been presented but according to recent studies carried out by Public Health England, e-cigarettes are about 95% less harmful to health than regular cigarettes (full report HERE).

As the ingredients of each e- juice depend on the manufacturer, the manufacturing process and chemicals used during manufacturing. It is important to check Safety Sheets and Certificate of Quality for every product you order.

We at Chemnovatic, thanks to thorough and continuous testing, can be sure our e- liquids and all ingredients, components or semi-finished products we supply to e-liquids manufacturers DO NOT CONTAIN Diacethyl, Acetyl Propionyl or many other potentially harmful substances (example of an e- liquid Certificate of Quality).