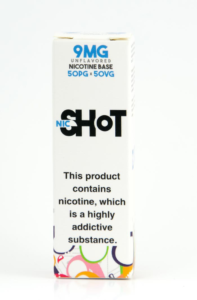 Before the introduction of Tobacco Products Directive (TPD) many nicotine base manufacturers were looking for a solution to oncoming nicotine products regulations, even more vapers were in panic, frantically buying e-liquids and nicotine bases in bulk to fill their stashes before the ban comes into force.

Two main concerns were: online sales ban in many countries for all products containing nicotine and the limit put on nicotine strength (no more than 20mg/ml) and volume of nicotine liquids (not more than 10ml). What does that mean in practice?

Whoever filled their cabinets with bases and liquids is vaping or DIY mixing e-liquids as we speak, others are stuck with what is available online (only nicotine free) and in their local stores (only up to 10ml and 20mg/ml). Well at least until recently they were…

Manufacturers are trying to battle strict TPD regulations in many ways – nicotine boosters or nicotine shots being one of them.

What is the idea behind nicotine shots? The nicotine shot itself is basically a TPD compliant nicotine base in a TPD sized packaging. It allows you to turn any nicotine free e-liquid into an e-liquid of your desired nicotine strength. It usually comes with a leaflet or some kind of instruction that explains doses needed to achieve a required strength.

Chemnovatic has implemented that idea in a range of Nic Shot nicotine shots. Nic Shot boosters are available in two nicotine strengths – 9mg and 18mg. To compliment Nic Shot products, we have also created two lines of nicotine free e-liquids – VAPY Complex Plus and VAPY Plus.

Once Nic Shots nicotine shots are registered, we have a complete freedom of adding different flavors to the lineup, creating custom flavors for various countries or introducing time limited offers such as Christmas flavors or summer flavors for example. What is more important – introducing such products is quick and easy, since the registration process is out of the picture.

While Nic Shot was created to be paired with intensive e-liquids in 30ml bottles to easily turn your 0mg e-liquids into nicotine e-liquids, Chemnovatic also broadens its previous offering of highest quality NicBase nicotine bases in various nicotine strengths and PG/ VG ratios by adding the 10ml TPD ready version to the lineup. It is perfect for creating e-liquids from scratch and can be sold to vapers even with the current TPD regulations.

New ideas to combat irrational TPD regulations are being developed daily, the above being only an example of what can be done to make e-liquids and nicotine bases available to vapers. Have you heard of any other ideas? Or maybe you have found your own way to comply with TPD regulations?

« What makes a good nicotin…
Third edition of Vape Exp… »